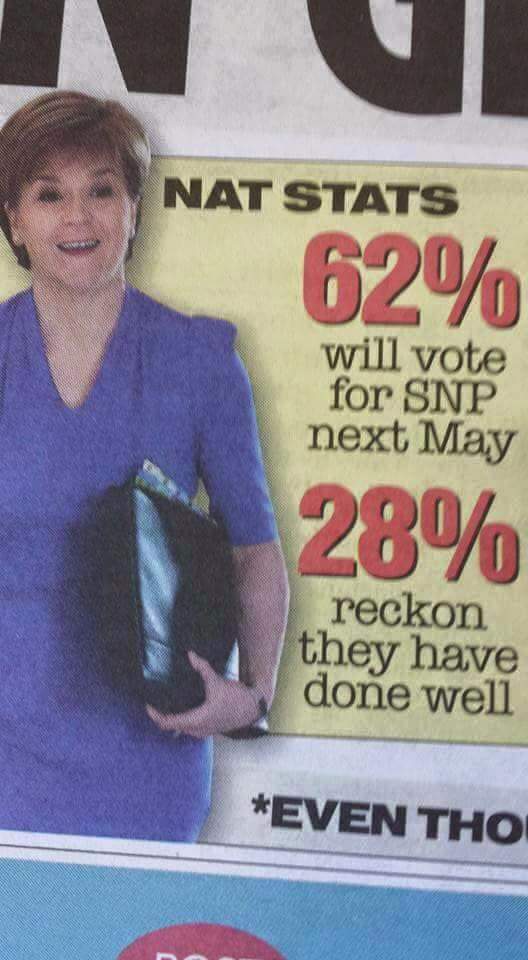 The news that support for the SNP in Scotland now exceeds 60% is unbelievable. However, it was just as unbelievable when their support first exceeded 50%.  Nonetheless, the revelation that the same poll showed that there is widespread dissatisfaction with how the SNP have managed the NHS, education, policing and the economy raises serious questions about why Scots are backing the SNP.

The first and most obvious answer to this must be that the SNP are viewed as the best of a bad bunch. They have followed a populist agenda whilst the main opposition in Scotland has never regained the trust it lost when it backed the Iraq war. Whilst this situation is bleak for Scottish Labour, widespread dissatisfaction with the SNP may mean that its new leader will be able to begin to close the gap in the polls if trust can be regained.

However, to close the gap Labour will also have to counter the second reason the SNP has remained popular despite falling literacy, failures in Police Scotland and cuts the NHS – nationalism. The SNP have succeeded to some extend in linking voting intention with identity. For a growing minority of Scots, politics is no longer about competence in office. The focus for them now is their national identity and which party best reflects that. This transition from ideology based politics to one based on national identity is one every nationalist across time has sought to achieve. Everyone in Scotland should be concerned to see this raw and intolerant form of nationalism gaining ground.

The challenge for Labour’s new leader must therefore be to firstly regain trust in Scottish Labour and what it can deliver in Scotland. Secondly, the aim must be to move the political debate back to fixing Scotland’s problems and meeting its aspirations.  Labour’s recovery shouldn’t be about Scotland v England, rich v poor or even right v left. It must be about convincing everyone that social justice is in their interest.